Launching NTP and the Latest Technological Trends of 2019

The National Transformation Program (NTP) was launched in 2016 by the Saudi Arabian government (Vision 2030). It focuses on developing the economy and the infrastructure of the Kingdom. It is also planning to diversify the economy and create new job opportunities. The usage f IT in Saudi Arabia has been rapidly growing and the government intends to digitally enable all the sectors of the economy under NTP.

Also, launching this program was for an aim, which is to diversify the economy to ensure that the revenue doesn’t only depend on oil. Executing the National Transformation Program (NTP) will advance digital transformation in all sectors of the economy. Moreover, in 2018, the governmental segment had held the largest market share that was over 22% which is followed by telecommunication, BFSI, and oil & gas.

This segment is expected to continue dominating the end-user segment and register the highest incremental growth that is followed by the gas and oil segments. Nevertheless, the IT market in Saudi Arabia reports an in-depth analysis of the prominent factors that influence the market including the drivers, opportunities, trends, and the specific challenges in the industry.

The overall spending on information and communication technology (ICT) in Saudi Arabia which is expected to reach $34.5 Billion in 2019. According to Hamza Naqshbandi, IDC’s country manager in Saudi Arabia, he stressed that the vital role that technology will play in enabling important aspects of NTP and identified several areas of opportunities around software and IT services.

Furthermore, he explained that using cases around these advanced technology solutions are emerging across Saudi Arabia reinforcing significance of these technologies in achieving some of NTP and Vision 2030 goals. Also, he revealed IDC’s prediction on IoT Solutions in the Kingdom will reach 1.5$ Billion in 2019 and the security solutions will attract the total spending of more than 400$ Million. References: IT Market in Saudi Arabia 2019-2023. Launch of NTP to boost demand. Saudi Arabia’s Top ICT Industry Leaders Gather in Riyadh as IDC Reveals Key Predictions for Year Ahead

Powering Businesses To Relocate Your Regional Headquarter To Saudi Arabia
January 20, 2022 No Comments

SAGIA announces over US$ 2 Billion in new Petrochemical Investments.
January 20, 2022 No Comments

Launching NTP and the Latest Technological Trends of 2019
January 20, 2022 No Comments

The Business Future of Saudi Arabia is Shining Bright
January 20, 2022 No Comments 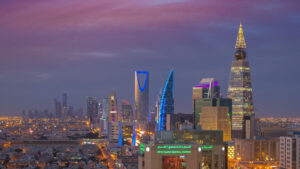 SAGIA, The Chinese Investment, and The Tourism Startegy
January 20, 2022 No Comments

Based in Riyadh, Saudi Arabia, Tools & Solutions has been initiating win-win business solutions for over 500 companies for 10 years.